Graphic and release courtesy of University of Iowa Athletics.

“This is an exciting day for the university, our department and the sport of women’s wrestling,” said Gary Barta, the Henry B. and Patricia B. Tippie Director of Athletics Chair. “Our wrestling history and success makes this a perfect fit. We are confident that at Iowa, our women’s wrestling student-athletes will have the opportunity to compete at the highest level athletically and academically.”

The NCAA recognized women’s wrestling as an emerging sport in 2020 for all three divisions. Currently, there are 45 intercollegiate women’s wrestling programs, including five in the state of Iowa. In addition, 32 states have a sanctioned high school girl’s wrestling state championshipS. In Iowa, the state tournament is sponsored by the Iowa Coaches Association and over 600 girls participated in high school wrestling a year ago.

“This is important to a lot of people for a lot of reasons,” said Iowa head wrestling coach Tom Brands. “This is historic. This needed to happen and it’s appropriate that it is happening first at the University of Iowa. There is no greater place in the world to wrestle than Iowa City, Iowa, and with our new wrestling facility we are prepared to offer world-class training for both our Hawkeye men and women.”

Iowa athletics is in the midst of the Carver Circle Campaign, a campaign that supports a new world-class wrestling training facility. The facility, which will be funded entirely by gifts, will be located south of Carver-Hawkeye Arena and connected to the arena by a tunnel. It will include coaches’ offices, locker rooms and expanded training space for the men’s and women’s programs.

“Enthusiasm and financial support from our wrestling fans and alumni is tremendous. There is continued momentum with the Carver Circle Campaign along with private support to fund the start-up of women’s wrestling,” said Barta.

With the addition of women’s wrestling, Iowa will offer 22 sports, including 14 women’s teams and eight men’s teams. The university previously added women’s rowing in 1994 and women’s soccer in 1996

“We are committed to gender equity and Title IX compliance,” said Barta. “As the national landscape related to enrollment continues to change, adding women’s wrestling puts us in a better position for the future.”

A national search for Iowa’s women’s wrestling head coach will begin this fall with plans to begin competing in the 2023-24 year. 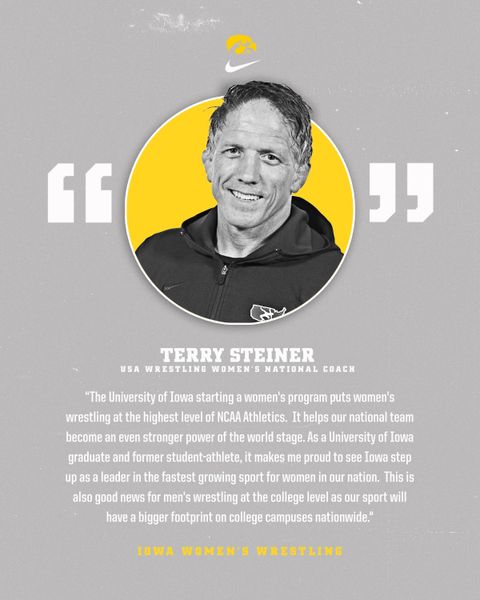 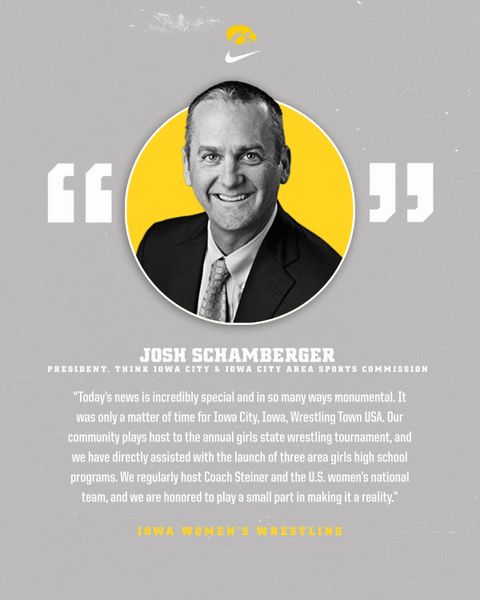 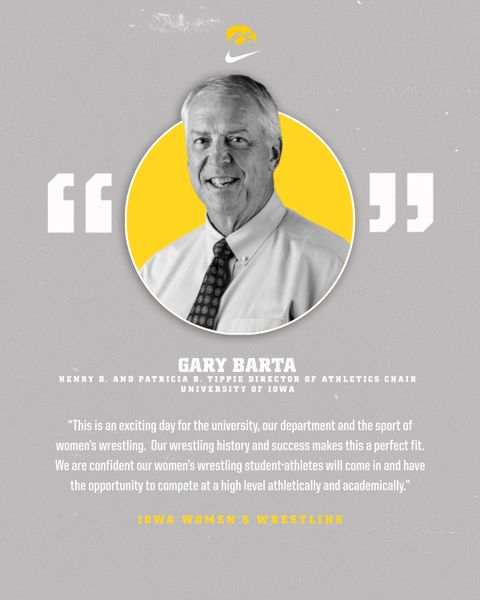 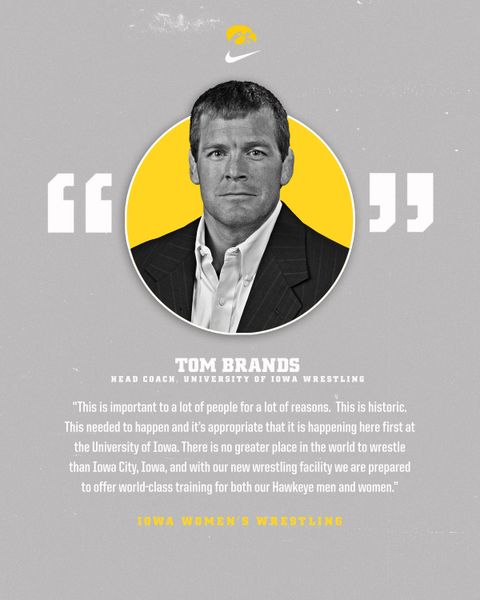 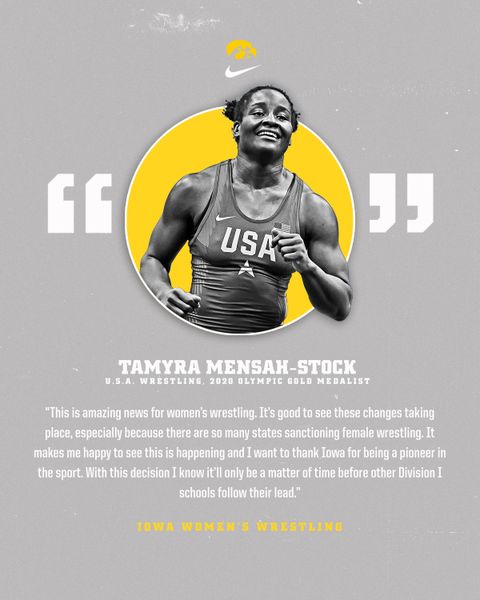 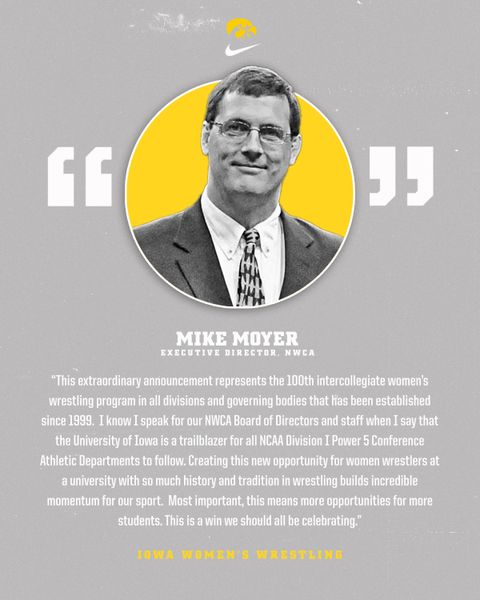 QUOTES FROM THE WRESTLING COMMUNITY

Tamyra Mensah-Stock – U.S.A. Wrestling, 2020 Olympic Gold Medalist
“This is amazing news for women’s wrestling. It’s good to see these changes taking place, especially because there are so many states sanctioning female wrestling. It makes me happy to see this is happening and I want to thank Iowa for being a pioneer in the sport. With this decision I know it’ll only be a matter of time before other Division I schools follow their lead.”

Mike Moyer, Executive Director, NWCA
“This extraordinary announcement represents the 100th intercollegiate women’s wrestling program in all divisions and governing bodies that has been established since 1999. I know I speak for our NWCA Board of Directors and staff when I say that the University of Iowa is a trailblazer for all NCAA Division I Power 5 Conference Athletic Departments to follow. Creating this new opportunity for women wrestlers at a university with so much history and tradition in wrestling builds incredible momentum for our sport. Most important, this means more opportunities for more students. This is a win we should all be celebrating.”

Terry Steiner, USA Wrestling Women’s National Coach
“The University of Iowa starting a women’s program puts women’s wrestling at the highest level of NCAA Athletics. It helps our national team become an even stronger power of the world stage. As a University of Iowa graduate and former student-athlete, it makes me proud to see Iowa step up as a leader in the fastest growing sport for women in our nation. This is also good news for men’s wrestling at the college level as our sport will have a bigger footprint on college campuses nationwide.”

Josh Schamberger, President Think Iowa City & Iowa City Area Sports Commission
“Today’s news is incredibly special and in so many ways monumental. It was only a matter of time for Iowa City, Iowa, Wrestling Town USA. Our community plays host to the annual girls state wrestling tournament, and we have directly assisted with the launch of three area girls high school programs. We regularly host Coach Steiner and the U.S. women’s national team, and we are honored to play a small part in making it a reality.”

Cathy Zaharis – Chair, Iowa Presidential Committee on Athletics and Women’s Wrestling and Carver Circle Contributor
“The University of Iowa continues to be a leader in academics and athletics, and this is another shining example. As Chair of the PCA, I am delighted we can provide this opportunity for student-athletes to achieve their educational goals at the University of Iowa. As a fan, I’m excited for young women to come to the University of Iowa and compete for Big Ten and NCAA championships as Hawkeyes.”